The “fat burning zone” is one of those exercise myths that just. won’t. die. If you work out at a gym, you’ve probably encountered that little box on your favourite cardio machine – the box that tells you where your heart rate should be for the “cardio zone” and the “fat burning zone”… as if the two are not compatible. Well, ignore it.  It’s about as outdated as the notion that a woman shouldn’t lift heavy weights or she’ll “bulk up.”  That’s another blog, by the way… Where does this antiquated workout philosophy come from? 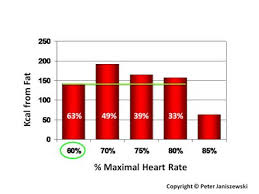 The body stores fat to use as daily fuel.  Not just to make you fear swimsuit shopping or give you dimples in those white pants you wish you could wear, but for an actual purpose.  Regular, low intensity activity like walking around the shopping mall, vacuuming, blinking, breathing and just generally existing is fuelled primarily by fat. Through chemical reactions, fat molecules are converted into a form of sugar for the muscles of the body to use.  Great news, right?  So keep moving – there is some very interesting research now to tell us that daily movement might be the key to staying slender! At higher intensities, fat recruitment is just too slow to provide enough fuel for the muscles.  At real workout intensity, about 60-90% of your maximum effort, the body begins to rely more on sugar available in your blood for just that purpose.  Fat is still used, but at a smaller percentage. Here’s the catch.  A pound of fat is equivalent to 3,500 calories.  A pound of fat is a pound of fat is a pound of fat. If you stroll on the treadmill for 30 minutes and burn 120 calories, you’re definitely worse off than if you had mixed lower and higher speed intervals for 30 minutes, with a heart rate at about 75-85% of your maximum heart rate, for 30 minutes to burn 300 calories.  Which would you rather burn?  120 or 300 calories?  Not a difficult choice. In fact, we now know there is evidence that exercising at a lower intensity level when you’re trying to shed pounds has no substantial effect on the amount of fat you’ll lose.  Overweight and obese women on a low-calorie diet were told either to exercise at a moderate intensity (approximately 50% of their maximum effort) or vigorous intensity (approximately 75% of their maximum effort), and there was no substantial difference in the amount of abdominal fat lost by either group. Another reason to go intense?  More intense workouts, like those involving heavier weights or speed intervals, have a greater 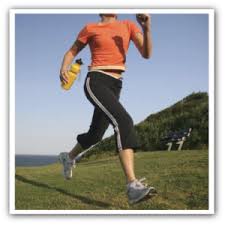 Add sprints to your cardio workout to maximize your calories burned!

effect on your body after your workout. Train hard and you’ll elevate your metabolism for the next 24-72 hours.  That means your workout is still working for you the following day, and maybe even the day after that! Here’s a quick way to calculate your maximum heart rate (MHR) to find out where your heart rate should be for optimal cardiovascular training and fat loss: MHR = 220 – age Example: 220 – 35 = MHR 185 beats per minute (bpm) To train optimally, perform your cardio workouts in a heart rate range of 65-85% MHR. This is your target heart rate range (THR).  Grab your calculator and figure out 65% and 85% of your maximum heart rate.  In the case of our example, a 35-year old woman, her THR is 120 – 157 bpm for her to make an impact on her body fat level and/or cardiovascular endurance. That’s the real fat burning zone.