I have to acknowledge a miracle that happened.  It seems right to share it during Childhood Cancer Awareness Month.  My dear friend Zoe and her Warrior daughter, Erin shared their story of pain, heartache, bald heads and victory.  Thank you to my dear friend for have the courage to share her story and for helping us all believe in miracles.  This is Zoe’s story, in her own words… On June 9, 2008, my daughter Erin had a matt of tumours removed from her lymph nodes at the Hospital for Sick Children. This hard, well attached lump was first discovered months earlier but there was a hiccup with our referral from our paediatrician’s office to the ENT doctor at Sick Kid’s. The lump grew extremely rapidly and while the tumour became more robust in my daughter’s neck, my daughter’s life force was leaving us. She was sleeping more, eating less and I was going out of my mind with worry. The day of the surgery was 4 days before her 5th birthday and our ENT surgeon told us that Erin had lymphoma. I cannot tell you how much I appreciated his direct communication style. While it was a nightmare unfolding before us, now that we had a diagnosis we could start to fight the fight, now we could begin to make Erin better. As devastating as cancer is, I knew we were actually very fortunate. Of all the paediatric cancers, this was one that was curable. In fact we were told that Erin had an 85% chance of being completely cured. My husband and I cried an awful lot for the first few days. I would do most of mine at night while Erin slept. I wanted to wave the magic wand a special friend had given me and trade places with Erin, but I couldn’t. I had experienced loss before but I was being called on to dig deeper than I ever had in my life. With the love and support of family and close friends and a really good therapist, I chose to have hope. Erin needed an advocate who believed she’d get better, she needed a hopeful mom and so that’s what I became. I was able to truly be positive for my daughter. In lots of ways too, I followed Erin’s lead – she was a child, she was carefree. It was Erin who taught me how to not worry about tomorrow, how to be in the moment. We spent a lot of time at Sick Kid’s that summer and would be doing a craft or a puzzle together and Erin was so happy and I thought well if she can be happy with everything that is going on inside that little body then surely I can. I also didn’t want to miss one opportunity to give her all of my heart – I didn’t want to waste a second of holding her, seeing her, smelling her, just being with her. Erin’s treatment protocol would be relatively short, such a blessing and would involve chemo, but not radiation, another blessing. We were blessed in so many ways on the journey to making Erin well again. We knew that the chemo was going to cause Erin’s hair to fall out and thank goodness we got some very good advice from our coach at the hospital who advised us to have Erin’s head shaved. Children typically lose their hair all at once over a 24 to 48 hour period after their first round of chemo. If their hair is not shaved often times they wake up with a pile of hair on their pillow and it can scare them. We had a wonderful stylist who came to our home shave Erin’s head. I had her cut my hair first, then my husband’s and then Erin’s to try and normalize this very non-normal experience. 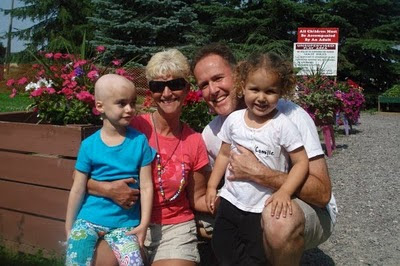 While wild horses couldn’t drag me from Erin’s bedside in the hospital, I had a 3 year old at home who didn’t understand any of this. We don’t live in Toronto so I would call Camille every night to kiss her good-night and hearing her little voice, sounding so young and vulnerable just about killed me. The guilt and sorrow that I felt each day, at not being able to be two places at once is indescribable, and yet we got through it. With just a few set-backs, Erin’s treatment protocol was over. Erin was cured. Erin was going back to school, but she was only 5 and as bald as an eagle. The Cancer Society and a nurse from Sick Kid’s organized a special seminar/workshop for the population at Erin’s school. During a special assembly the staff and students at Erin’s school learned all about cancer and treatment and hair loss and I think it really helped everyone not only accept Erin, but empathize with her, as well – another blessing! 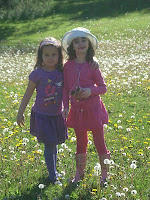 Today Erin (right) is a healthy, happy 7 year old and I will always be grateful to the friends and strangers – who became friends that got us through the most difficult, painful time of our lives.